BACK TO THE BLOG

“This is not how I expected this bootcamp to be,” Maysa* told Lama, a CodeBrave teacher, on the first day of our 2021 Bekaa Coding Summer Bootcamp.

Maysa was an 11-year-old girl who joined our coding bootcamp at the Makassed School in el Marj, Bekaa, last July. However, she simply wasn’t interested in computers or coding. She thought she was joining a summer camp all about outdoor fun.

In order to motivate her, Lama suggested that Maysa worked on her laptop, which was connected to the projector. Her idea was to put her in centre stage and support her by guiding her steps through the day’s projects in front of everyone. Maysa was definitely not a shy girl. She accepted Lama’s offer that day, and it was a great success for both of them.

Fortunately, this also had its positive influence on Maysa’s classmates who showed more enthusiasm to learn. Our 50 5th and 6th graders seemed to enjoy our SuperCoder class, under the direction of 3 teachers who took complementary roles at training them and making the best out of their July bootcamp.

Few days later, Lama and other teachers were impressed by the shift in Maysa’s behavior. She had arrived a bit late to class but took her usual spot. At break time, Maysa told Lama: “I’m sorry for being late. I missed the school bus this morning, but I wanted to come, so I rode my bike instead!”

Lama and the other teachers knew that their job was (almost!) done. It was Maysa’s perfectionist and hardworking attitude that made her step back when she felt the material was difficult. She wasn’t bored; she just needed to grasp the lessons as fast as her classmates. Lama’s observations and actions in class that day weren’t a fluke. They are the direct results of CodeBrave’s teachers’ training in educational psychology which allows teachers to understand every student’s needs simply through observation.

The bootcamp atmosphere continued with a mix of pure excitement and still focus, and everyday had its own aha! moment. On the first day, students quietly worked on their first project, creating a pedometer using code. Moments later, they were jumping around, excited at having succeeded to use the micro:bit in their shoes and count their steps. Who said coding was all about sitting around on a laptop?

On day 2, they learned to build an instrument to experience the coping effect of music. In the beginning, students were fully absorbed and busy using cardboard to cut delicate pieces for the instruments. A while later, the classroom turned into an improvised concert. Experimental melodies and laughs filled the air from students who enjoyed programming their micro:bit in response to touch.

But, if you were to ask the teachers about their students’ favorite coding project, the “if/else” game would be an immediate answer. The students played the game both in person and with micro:bit. Mehdi*, one of the students, was brilliant enough to take the game further. He wrote a code to use the micro:bit for randomly choosing two students to compete! 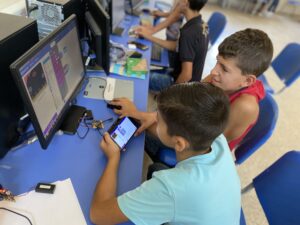 At the end of the Bekaa Coding Summer Bootcamp, the SuperCoder class proved to be a well-rounded one. Students did not only receive coding lessons. They also got the chance to express their creativity, engage in breathing exercises, and connect with each other and themselves. They would gather at the end of each day to reflect on what they learned and enrich each other’s experiences under the belief of “Yes, we learned a new skill. We are capable. We are resilient.”

The Bekaa Coding Summer Bootcamp wouldn’t have been possible without the generous support of our donors. Our team is extremely thankful for being able to marry potential to opportunities in Lebanon through the tech and soft skills training we offer to children and youth.

To keep changing lives through tech education, head over here to contribute, and/or encourage children you know to enroll for our coding courses at CodeBrave Tutors, where every paid session funds another for an underprivileged child in Lebanon.

Until the next CodeBrave Story, stay tuned!

*The students’ names have been changed for their protection.

Stay up to date

Sign up and stay updated with our latest news and stories from our students in Lebanon.

No Thanks Maybe Later

Send this to a friend